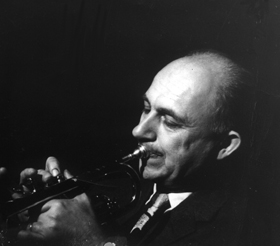 Doc Evans story from the mid-1940s

Bud Freeman wrote a book a few years back entitled You Don’t Look like a Musician, a sort of autobiographical work full of short anecdotes that involved himself through his career. Of course, I don’t care what he says, he does look like a musician, as you can tell from looking at his picture in this book. But Doc Evans didn’t look like a musician or talk like one either, for that matter. When he started on his cornet or trumpet, though, the result left no doubt in your mind about his profession.

I sat with him for many hours in Chicago’s Jazz Limited, in the mid-1940s, trying to get him to go on tour with me. He wasn’t steadily employed; and even the charming hosts of the place, Bill and Renee Reinhardt, were as generous as they could be, he wasn’t going to augment his bank account much playing that job. He refused because he said he didn’t like to travel. It made him feel too much like a professional musician, and when you were a professional musician you didn’t get to play the way you wanted to.

I offered him more than twice what what he was getting. He’d have a chance to play with the very best jazzmen. He found every excuse. He didn’t want to go to the West Coast. He got car sick riding in Greyhound buses. He had to lay off for awhile because something was going wrong with his lip. I understood that for reasons of his own, whatever they were, he wasn’t going to become a part of Journey’s Into Jazz.

Just then, it was about one in the morning, a pretty little girl with blonde ringlets, about half his age, maybe less, approached the table where we were sitting and asked him, “Will I see you again tonight, honey?” Then, of course, I understood.