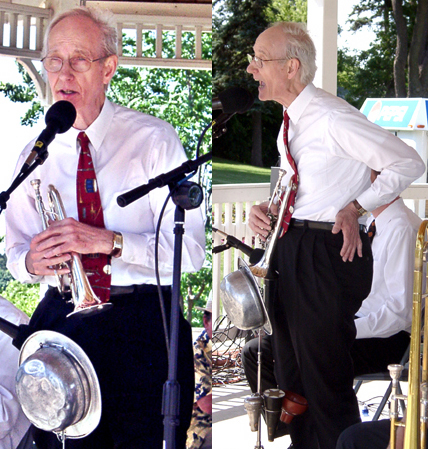 Charlie DeVore, cornetist for the famed Hall Brothers New Orleans Jazz Band. The Hall Brothers played at Mendota’s Emporium of Jazz from March, 1966 through September, 1991. This was the site of Doc Evans’ Rampart Street Club from July of 1958 through December of 1961.

How did you get started in music?
The U.S. Navy sent me to New Orleans in June of 1954 and after hearing all that music I rented a cornet from Werlein’s music in February, 1956, and have been struggling on the instrument ever since. I met Bill Russell later that spring and he introduced me to all my New Orleans musical heroes such as George Lewis and Jim Robinson. He recommended taking cornet lessons from Professor Manual Manetta, teacher of all instruments who had played with Buddy Bolden, which I did.

What made you decide to become a musician?
Bill Russell took exceptional interest in me personally making me aware of music and musicians I never would have discovered on my own. When I finally realized Bill had faith in my ability to eventually become a halfway decent cornetist, I recalled saying to myself, “I don’t know where all this is going to lead, but I’m staying on the path for life!” Even tho’ I realized early on that I didn’t have the ability to become a full-time professional musician, I have never veered from a commitment to playing and appreciating New Orleans and associated styles of traditional jazz.

Do you remember the first recording you ever purchased (jazz or otherwise)?
The first records I purchased were part of a four record set of 78’s in album form, which was the norm back in 1950, entitled “Jazz As It Should Be Played by Bix Beiderbecke”, Columbia Records Album C-29. It contained mostly recordings made famous as “Bix and His Gang” including “Royal Garden Blues”. While a student at the Minnesota School of Business in downtown Mpls, I first became aware of Doc Evans and discovered his JOCO recording of “Royal Garden Blues” at McGowan’s Record Store which became my next purchase. I thought, and still do, that Doc compared very favorably to Bix.

Do you have a Doc Evans story?
One night back in 1972, The World’s Greatest Jazz Band of Yank Lawson and Bob Haggart made an appearance at the Hall Brothers Emporium of Jazz in Mendota after a particularly long and strenuous road trip. They collectively allowed that it was great to relax in a low-key jazz club such as the Emp after all the high-powered gigs they had played in recent days. Trumpeter Yank Lawson got so “relaxed” after the first set that he couldn’t play the rest of the night. Doc, who just happened to be in the audience, sprang to the rescue and filled in for Yank most admirably for the rest of the evening playing some of the most knocked-out horn I think I had ever heard him play in person. What was remarkable was his knowledge of the band’s arrangements, many of them based on the old Bob Crosby band repetoire. Doc tore through everything so well, Yank was lucky to still have his job after recovering from his “relaxation” the next day!!

Does traditional jazz have a future? How can we help the audience grow?
It has been my observation that traditional jazz has an appeal to all ages when it is played well in an entertaining way. Audiences seem to respond to performers who genuinely seem to be having a good time; musicians who take the music seriously but not necessarily themselves. Louis Armstrong may have been the greatest entertaining jazz musician of all time. He could entertain an audience as no other, but as soon as that horn went to his lips, every note played was his personal commitment to the music. And he never compromised that commitment for the sake of entertainment. Louis always meant every note he played. I feel audiences will always be there for traditional jazz bands and musicians who can reach out and entertain while remaining true to the music.
Traditional jazz needs to be accessible to younger people in an environment that isn’t perceived by young people as being strictly for the geezer population. Restaurant and club settings seem to be the most desirable, moreso than concert halls. The trick is to convince the owners of such establishments that featuring traditional jazz could be profitable. I’ve also observed that traditional jazz played by younger musicians for younger audiences may help to increase this audience’s interest. This is certainly true in New Orleans during the French Quarter Festival when bands perform at outdoor venues along Bourbon Street. The younger the band, the younger the audiences stopping to listen!!

Name one jazz recording that you cannot live without.
If I couldn’t live without one, I couldn’t live without a hundred; however, having said that, there is a beautiful Bunk Johnson recording on American Music, AMCD-1, of an extended blues recorded in New Orleans in 1944 by Bunk and his New Orleans Band called Midnight Blues. It lasts well over nine minutes and must represent the sound of those early 20th century New Orleans bands that played long blues in the dance halls after all the polite people had gone home. I’d be hard pressed to get along without it!! Years ago, in July of 1958, I helped Doc do some painting of the band stand shell at the Rampart Street Club and played this piece for him by Bunk on a small, portable, phonograph. Doc heard the whole thing and said, “Now, that was really pretty!!” Bill Russell’s American Music recordings captured Bunk’s tone better than any of his other recordings.

What is the best thing about playing jazz?
New Orleans and traditional jazz styles require discipline in terms of melody, harmony, and rhythms. However, within these guidelines there is great freedom to develop one’s own sense of instrumental timbre (a jazz “tone”, if you will), rhythmic variety and improvisational melodic ideas. This sense of freedom allowing one to play as one “feels”(which can differ from performance to performance) is what I find so appealing about the jazz experience.

What is in your CD player right now?
“Chelsea” by Fats Waller and Clarence Williams, track #3, Butch Thompson’s “Minnesota Wonder” CD from 1992 on Rounder Records.

What is the last book you read?
“The Louis Armstrong Companion: Eight Decades of Commentary / edited by Joshua Berrett”. Published by Schirmer Books, copyright 1999.

What is your favorite escape?
Going through my sheet music collection and humming all those great old songs, particularly the verses!!